While some boys will talk as though they've had plenty of sexual experience when they actually haven't, there are also some boys who will say they're virgins when they're not. How do you know for sure if a boy is a virgin when there is no physical, tangible way to tell? There are some behaviors that may point to a boy being a virgin, but when it comes down to it, trusting what he says on the matter may be the most reliable thing you have.

Can You Actually Tell?

Plenty of myths exist regarding how you can spot a male virgin, but these myths are largely just that - myths. They don't take into account the individual boy and his personality traits. The only absolutely reliable way to find out if a boy is a virgin is to ask him and he responds honestly. Unfortunately, there is no way to ensure he's being truthful.

Myth: Only Virgins Brag About Their Conquests

Lying about sexual history is not exclusively a male phenomenon. Many people make claims to have had more intimate encounters than they have actually had. Some people who boast about having sex do so because they did have sex and prefer not to be discreet. On the other hand, some people make claims of sexual conquests in an attempt to fit in. It can be tough to tell if he's lying or not, so consider what you know about him. Would it be completely out of character for him to lie about something?

Myth: A Bad Kisser Must Be a Virgin

Just because a boy isn't a very good kisser, it doesn't necessarily point to a designation of virginity. Keep in mind that perhaps his previous sexual partner didn't want to hurt his feelings, so they didn't mention anything about the less-than stellar kisses. Or perhaps he just has a different kissing style from what you prefer. Bad kissing is no guarantee of virginity.

Myth: If He's Shy About Touch, He's a Virgin

It's entirely possible for a boy to be nervous or shy about touching his partner even though it's not his first time. It may be that his first sexual encounters were brief or perhaps even unwanted, making him apprehensive about sexual contact in general. Just because a boy doesn't eagerly grope at his partner does not mean he's a virgin and this is his first time.

Gaining consent before intimate contact is respectful and considerate - it's also becoming the norm in a society where nobody wants to later be called out as a sexual aggressor. If a boy consistently asks for consent from you before taking anything further, it does not mean he's a virgin. He may be a boy with ample sexual experience who quickly learned that partners are more receptive when they feel in control of the situation.

Since asking and receiving an honest response is the only way to know if a boy is a virgin or not, it's good to go into the conversation prepared to hear the answer. In other words, don't get angry if the answer isn't what you wanted to hear. 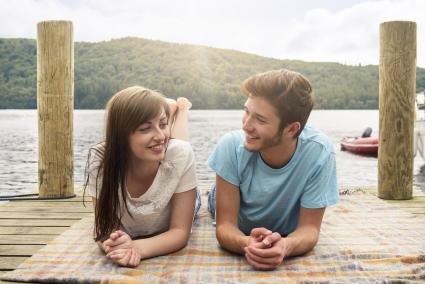 Don't set the boy up for failure by revealing what you want the answer to be before you even ask. For example, don't say, "I've always hoped to one day marry a virgin. Are you a virgin?" or "I'd never want to take away someone's virginity. You're not a virgin, are you?" because phrasing it this way may compel him to give you an expected answer instead of the truth.

Presenting your question alongside your own sexual history may backfire as he wants to match you. It's not a good idea to phrase the question along the lines of, "I've never had sex. You haven't, right?" or "You will be my fourth sexual encounter. What number will I be for you?" because both versions make certain assumptions and can make for an uncomfortable moment.

It really isn't your business if any boy is a virgin or not unless you're in a relationship with him and intend to become intimate eventually. Asking a male classmate if he's a virgin for no reason beyond your curiosity is not only inappropriate - it's rude. But if you have plans for intimate contact, you are well within your right to ask about sexual history (and if he's been tested for STDs). If this is the case, tell him you need to know what he's done in the past before you're willing to move forward. If he makes claims of being a virgin but you don't believe him, ask yourself if he's really someone you want to be intimate with if you can't trust him.

A boy's sexual history may be a painful subject for him. Not wanting to talk about it doesn't automatically point to virginity - it may point to emotional trauma or simply discomfort with the topic. As a sexual partner, however, you are entitled to know about his previous sexual encounters; you don't have to hear all the details, but you should know enough to decide how much of a risk you'd take by being with him.

1
Comments
© 2006-2020 LoveToKnow, Corp., except where otherwise noted. All Rights Reserved.
Resources, Advice & Tips for Covid-19
Read More
How to Know if a Boy Is a Virgin