How you split the bills in a relationship might depend on a wide variety of factors including each person's income, spending habits, debt, cultural norms and expectations, and how long you have been together. No matter what way you choose to split the bills, it should be agreed upon by both people and only deviated from when both people accept the change.

If two people have not yet merged their lives, such as with in the beginning of the relationship when they are "just dating," splitting daily household expenses shouldn't be a concern. But when it comes to paying for things that both people use or enjoy, there should be a conversation and agreement about who pays for what. Avoiding the conversation might lead to resentment or confusion at some point.

There is nothing wrong with someone paying for the majority of dating expenses, as long as it's agreed upon by both people to avoid anyone feeling taken advantage of. There are many reasons why a dating couple might choose an expense agreement that isn't 50/50:

When two people are in a casual dating relationship with one another there shouldn't be a need for any conversations about expenses beyond who pays for dinner or the movie tickets or things along those lines. Anyone who tries to compel someone they are casually dating to start picking up the burden of car payments, cell phone bills, or other living expenses is likely trying to take advantage.

If a dating couple encounters a major expense such as a vacation, dividing up the cost should be according to the conclusion they come up with after discussing what they think is fair. Some things to consider:

Paying Bills in a Committed Relationship

Couples who live together or who are married should have honest conversations with one another about their financial situations - preferably long before they move in together or get married. In some states, both assets and debts incurred throughout the course of the marriage (or long-term relationship, in some instances) are considered "community property" of both people. When attempting to acquire loans or credit cards jointly, both credit histories are taken into consideration. Obviously, being blissfully unaware of a partner's financial situation isn't a smart move for anyone involved. 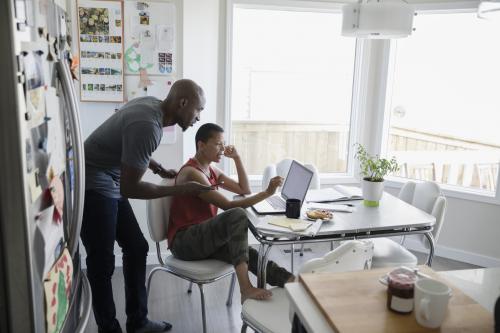 Equal According to Couple Standards

Couples in long-term, committed relationships should work together toward their common goals; this is a healthy arrangement both relationally and financially. While one person might make more money than the other person, if the couple are on the same page with their financial goals, there should be no question as to who pays for what - all income is the couple's cumulative money. It all goes into a joint account that is used to pay the household expenses.

For some couples, combining finances makes them uncomfortable so they elect to keep their money separate and divide up expenses - while this is fine as long as they agree upon the division, it's far more difficult to succeed as a team when the players aren't "all-in." Some couples find the solution to this is to pool all income with the exception of an agreed-upon amount that each person is allowed to spend on whatever they please - no questions asked. Financial expert Dave Ramsey calls this "blow money" and suggests it's important even when trying to pay down substantial debt.

There are hundreds of combinations in which a couple might split expenses, and none of them are "wrong" as long as both people agree upon them. Be honest with your partner about your financial situation; it may make you feel vulnerable to discuss money, but a healthy relationship inevitably involves some vulnerability.

1
Comments
© 2006-2020 LoveToKnow, Corp., except where otherwise noted. All Rights Reserved.
Resouces, Advice & Tips for Covid-19
Read More
How to Split the Bills in a Relationship