Couples fight - this is a simple fact of being in a relationship with another human. Fights can be productive and actually bring two people closer together if you follow the rules for fair fighting. It helps if both people agree upon following these rules long before a fight even happens.

A fair fight allow for both people to be heard, but perhaps most importantly, a fair fight allows for both people to be understood. Accusations aren't flung and the focus is on feelings instead of blame. Use the editable checklist below as a quick guide for the 10 rules; if you need help with downloading or printing the checklist, refer to the Guide for Adobe Printables. 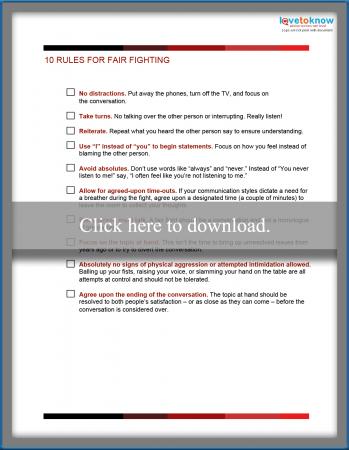 It's tough in today's plugged-in world to have a face-to-face conversation without distractions, but a fair fight allows both people to be heard without other things vying for their attention. Turn off all the potential distractions so both people can focus on the topic at hand.

Both people should be allowed to voice their concerns without getting interrupted by the other person. When both people know they will have the opportunity to express their feelings, they'll be less likely to interrupt to have their voice heard.

To ensure there are no misunderstandings, the couple should repeat what they heard. For example, "It feels like I'm the one who has to do all the chores around here and it bothers me" might be followed by the other person responding with, "I hear you saying you're bothered because the burden of household chores falls upon you." This is to avoid misinterpretation of statements, such as following the complaint of chores, the other person might think, "He's saying I'm lazy," which isn't what was said at all.

People are put on the defensive when they feel like they're being attacked, so using sentences that start with "I" instead of "you" will make the person more receptive to the message. Here are some examples:

Depending on your communication style as a couple, you may need to allow for agreed-upon breaks from the conversation. While there are some couples who prefer to power through the fight without breaks, there are some people who get overwhelmed in emotional conversations and need breaks to collect their thoughts. This certainly does not mean that one person is allowed to abruptly leave without saying a word, but instead that one person is allowed to say, "I need a five minute break, OK?" without resistance from the other person.

A fair fight should be a conversation between two people - not a monologue of grievances from one person. No one is allowed to close themselves off and stop participating in the conversation; if they're having trouble forming their thoughts they should instead request a break as described above.

Rule 8: Focus on the Topic at Hand

Non-verbal communication can speak volumes and can serve as effective intimidation techniques, so any aggressive gestures or behavior is not allowed in a fair fight because it might make the other person apprehensive about voicing concerns. Examples of this behavior include:

Rule 10: Agree Upon the Conclusion

When the issue at hand is considered resolved by both people, agree upon ending the fight. This should be the end of the discussion and shouldn't prompt additional hard feelings or snide comments; the issue should be considered closed and only revisited if both people don't hold up their end of whatever agreement was reached (or if the agreed-upon resolution turns out to be ineffective).

Though the 10 rules above can be quite effective in helping couples fight fairly, it's fine for a couple to modify the rules to make the rules better work for them. The main point is to make sure both people agree upon the rules before a fight even starts because then both people know what the rules are before the fight begins. If both people agree on the rules there won't be any rules that one person considers unfair, like "I always ask questions first in a fight," or "I solely decide when the fight is over."