Do you ever feel like your dating life exists solely to collect 'it'll-be-funny-later' stories for your future grandkids (the ones you pray you'll get around to having someday, when all these cringe-worthy shenanigans are over)? You're not alone. Grab your pint of ice cream and check out these horror stories while you wait for Netflix to load. Though these are personal stories, names have been omitted to protect the innocent (and their dates, even if some people don't think they deserve the protection).

Your Playfulness Gives Her Migraines

I once went out with a younger guy who was really cute, intelligent, and such a gentleman! After pet peeves came up in conversation, he asked, "Does this annoy you?" and poked my arm.

Well, yes, it did! It got worse when he wouldn't stop and ended up chasing me around my car with his finger pointing at my shoulder, repeating, "Does this annoy you?" for what felt like an hour. I left with a migraine and never returned his phone calls or texts again.

If you're repeatedly asking, "Does this annoy you?" the answer is always YES! Save it for your siblings. 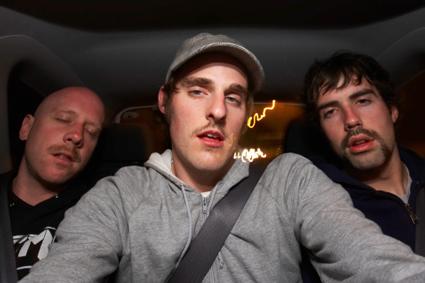 This guy invited me to watch an amateur car race with his friends. Thrilling, right? (It was to me! At first.) They drank--a lot--and I did not. After a couple of hours, I was the only one who wasn't completely wasted, and obviously by default, the involuntary designated driver. It had been his plan all along. What he didn't know was, I was scared to drive on highways. I drove everyone home on that highway, alright, but let's just say it wasn't a gentle ride. He nearly ended up having to deep clean the interior of his car thanks to the many sudden jerks of the steering wheel and the ups and downs in speed. He and his friends were a nice shade of pale green all the way back to their town, and the look of sheer terror in their eyes almost made it worth it.

It was my first time out on a date after my serious relationship ended. I wanted to make a good impression, of course, so I borrowed some 'chicken cutlets' for my bra to give the girls a lift. My stiletto heel slipped out from under me in the gravel parking lot when we got to the restaurant and I fell. When I did, one of those glossy silicone inserts in my bra popped out about a third of the way. I didn't notice until I leaned my head down to scan the bottom of the menu. It caught my eye. I froze and then excused myself to the restroom to fix it, but what I really wanted to do was fake an emergency and have him drive me home.

Autocorrect Wants You to Be Lonely 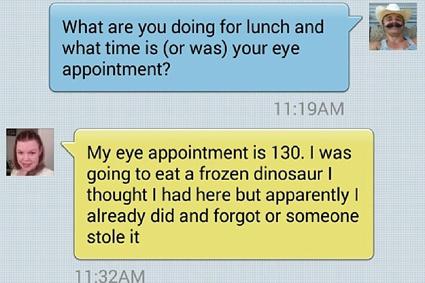 "I had a good time tonight! You're so cute and I love your dimples!" takes on a whole new tone when autocorrect decides you don't really mean dimples. Instead, you mean something a little lower. . .about chest-level, right? It happened, people.

Don't make that mistake of complimenting your date's nipples after what was otherwise, a great first date.

A nice guy took me out to lunch, but we ended up having absolutely nothing in common and the awkward pauses in conversation just got longer and longer over the course of the two-hours. I had zero interest in a second date and thought we were both on the same page, but when lunch was over, he suggested we fly across the country to meet his mom who'd been hoping to marry him off sometime soon. Since he was clearly crazy, I drove home the long, indirect way to lose him. 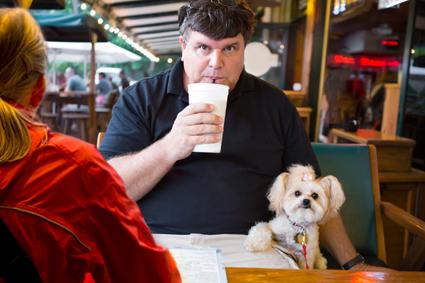 I met up for dinner with a well-mannered, handsome guy, but the conversation somehow kept circling back around to his beagle! I didn't even have a dog, so we couldn't share funny stories or commiserate. The conversation consisted mostly of his dog stories and a lot of nodding on my part. By the time the check came, I felt like I knew Ferdinand (aka Ferd the Turd) much better than the man in front of me.

Giving Yourself a Mid-Date Makeover 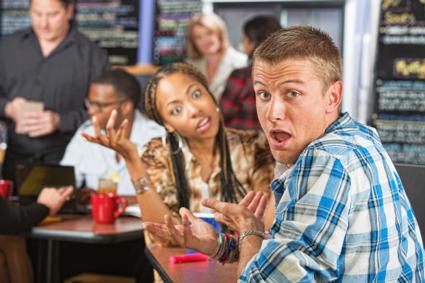 After a few weeks of chatting online, I agreed to meet a guy from a dating site. He showed up looking like Eminem circa 2001, which wouldn't have been a big deal if that had been his true style, but I'm not sure he even had one.

Halfway through the date, he asked me to sit on a bench and wait for him, so I bought a coffee and sat down, thinking he may have needed to use the restroom. Then I noticed him staring at me from the women's section of Payless. I had to see what he was going to do next, so I stayed and pretended to be oblivious. He disappeared and showed up about 10 minutes later dressed more like Luke Bryan, and asked, 'Do you like me now?' (I swear he added a British accent!).

I was glad I had bought a coffee, as I'm sure the caffeine helped me run faster.

Focus on Your Date, Not Your Plate 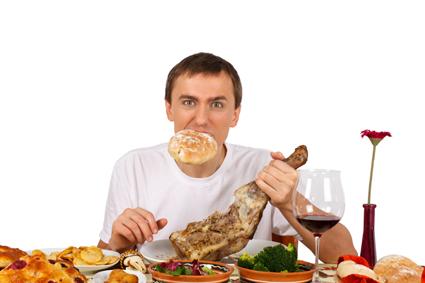 I went to dinner with one guy who practically planted his face in his chicken alfredo and just shoveled the food in until it was completely gone. He didn't look up or say a word. It was disgusting.

Eye contact while listening is still good. Zoning out and hovering your face two inches above your plate is not.

Chillin' With Grandma…in the Cemetery

I was hanging out with my cousin and his friend a lot one summer. His friend asked me out on a date and when he picked me up, I figured we would go to dinner, but he wanted to take me to his grandmother's grave. Umm, no! I didn't go and that was our last date.

It's great to be a family man (or woman), but wait a few dates before you introduce them to your relatives…especially the dead ones. If you don't want to go the traditional dinner and a movie route, there are other options that don't include Grandma's final resting place.

Say "Be Right Back"

One guy took me to Dairy Queen for our date. He suddenly got up and left, without saying a word, and then came back. Apparently, he had gone to the bathroom.

It's fine to leave your date alone for a few minutes, but it's only fair to let them know you're coming back, even if you have to do it with a "deer in headlights" look in your face before you dart to the back of the restaurant or a line of Porta Potties.

I was all dressed up in my floor-length dress, hair done, makeup done, and everything. He (who had a 'real' job and no real bills) showed up to pick me up for the formal in a nice suit, opened the door to his truck for me so I felt like a princess, and drove down the street to…Burger King, of all places. Not even the Denny's next door! When we got there, we ordered off the 'two can dine for $4.99' menu, sat down at a table, and ate our messy burgers and fries. We got so many weird looks from the other customers and staff there.

Depending on the screw-up, there may still be a glimmer of hope for you and that person you want to be your special someone. If you're mortified, own up to your gaffe and apologize. If you were the sane one on the date but have had time to digest whatever happened and decided they meant well, reach out to him or her and suggest a do-over. Share your own first date horror stories in the comments below!