Someone's caught your attention, but you're too afraid to approach him or her. A handwritten secret admirer letter could be the jumping point to express how you really feel, especially in this day and age of digital overload. The key is to keep it simple and genuine.

What to Include in Your Letter

The best notes to flatter your secret crush require something thoughtful, honest and unique. Stick to a brief written expression of how you feel versus an essay, and leave out things like how you can't stop thinking about them, or trite poetry such as, "Roses are red..." Your goal isn't to scare them or suggest you're completely infatuated, but to declare your interest. To do so, spend time reflecting on what it is you appreciate about this person and then compile your letter with the following ideas.

To make sure it gets in the right hands, don't forget to write the name of the person you're crushing over. Identifying them by physical appearance can come across as creepy (e.g. Dear beautiful girl with silky red hair). It can also be confusing and potentially fall into the wrong person's hands. Instead, start your letter with, "Hi/Dear/To (Name of your crush)."

Here's where you tell your crush what makes them so special. Is it a common interest, their cute smile, or your admiration for her skills? Explain what it is that makes the person unique without going overboard about how wonderful they are or how much you can't stop thinking about them. In a few sentences, you can tell him, "I thought your presentation was really creative," or "I like your style." Write something personal, but put yourself in your admirer's shoes and create something that would impress, rather than scare them off.

Help make the person you are admiring feel great with a closing that compliments them, but doesn't make them feel as if they have a stalker. For example, you could say, "I just wanted to let you know someone thinks you're pretty fantastic." Reading that, your admirer can't help but feel special.

The best way to end a letter of this nature is by simply signing something vague simple like, "Your Secret Admirer." Make sure you know how to spell secret admirer before you close! You don't want a spelling mistake to cause problems. If you're wanting to be a little flirtatious you could try something like, "Someone who thinks you're beautiful/handsome."

Delivering your note is a tricky proposition since you don't want to be discovered, but you want to make sure it gets into the right hands. Make sure the recipient's name is on it clearly, so that your efforts land into the right hands. Next, get creative with your delivery. Go beyond just leaving it out somewhere to be discovered. After all, you've made the effort to write the secret note, why not make an impression with delivering it too?

If the above tips don't inspire you to figure out what to write in a crush's note, read this sample letter to help guide you. Note how the letter stays lighthearted and complimentary and never delves into the realm of potentially creepy. If you need help downloading the sample note, check out LoveToKnow's Guide for Adobe Printables. 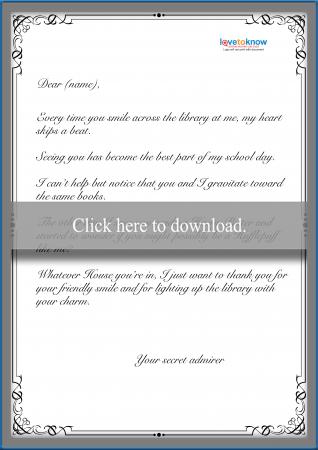 What to Do Next

Once your note is delivered, try to gauge the recipient's reaction. If they seem pleased to have a secret admirer, you can write more notes, or consider upping your game with a few small presents. If on the other hand, they seem a bit scared off, it's best to lay low for a little while rather than doggedly pursuing your affections in secret. Remember, the goal is to make your admired feel special.