It seems like the majority of modern love connections are made on the phone, be it through dating apps or texting. For those who aren't practiced in the nuance of digital communication, learning how to flirt over text can be a hard thing to do. Thankfully, there's a flirtatious technique for every type of personality out there, be it bold and brash or shy and demure. So, if you're unsure as to how to move into flirting mode with your crush, or you're just looking for some new ideas, check out these examples.

One of the fundamental aspects of digital communication in the modern age is the use of visuals to express deeper meaning as well as to exhibit pieces of the sender's personality. This can come in the form of using clever emojis in the place of words or sending a person a few memes that you both can bond over. Something as simple as adding the fire emoji to a compliment about how someone looks, or a thinking emoji when you ask if they're awake can show someone what your intention is. Since online communication makes misreading someone's intent so easy to do, incorporating visual language to reinforce your meaning can make or break a potential relationship.

An easy way to set a flirty mood is to start talking about romance. Now, you could do this through a few different avenues, which include:

Bonding over your past romantic failures can give you a way to work in the future possible romance between you and your crush. For example, when your crush mentions their worst kiss with someone, you could respond with "Oh I'm sure it wasn't you, but do you want to test that theory?' 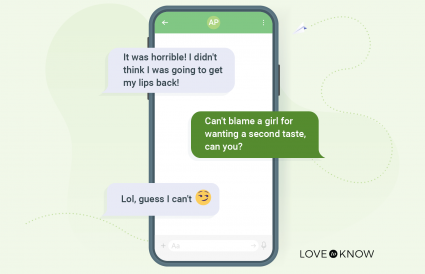 Another way to create a romantic vibe without abruptly asking for one is to ask them about romantic gestures they like. For instance, you could ask them to describe what they think the most romantic vacation would be, and when they tell you, you could respond with "Only thing that'd make it more romantic is me being there."

If you send your crush texts that imply how much they've been on your mind, chances are you'll find out whether they're interested in you by their first response. They're flirting back with you if they reply with something similar, which gives you the green light, if you're comfortable, to make the first move and ask them out on a date.

Give Them a Clever Nickname

There's nothing that quite stirs up the butterflies in someone's stomach than getting a personalized nickname from someone. One way to pique someone's interest over text is to refer to them by a cute nickname like Sunshine or Honey.

While it may not always feel like it, honesty is always the best policy, and that certainly goes for romantic situations as well. When you're trying to flirt with a crush over text, but you're not someone who can naturally quip a coy double entendre, then being honest with how you're feeling about the other person can be just as riveting. Here are a few examples of how you can use your honesty to set a flirtatious mood. 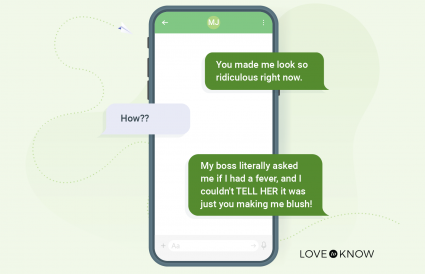 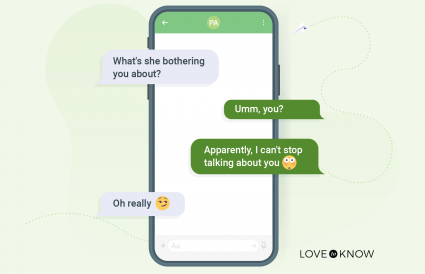 Know When It's Time to Go

One of the most important parts of flirting over text is knowing when the conversation has come to an end; if you're getting one-word responses or a lot of time is passing before each reply, then it's time for you to take a break. Be comfortable letting conversations end organically, but if you really want to keep the other person talking, try to circle back to a shared experience or inside joke. Connecting to someone over something you both can talk for hours about may invigorate your dead text chain.

For some people, flirting over text might feel a bit disingenuous and for others it may be difficult to make a connection with someone when you can't get a read on their energy and physical responses. However, Dr. Martin Graff explores on Psychology Today two benefits to choosing to flirt over text rather than in-person. "Firstly, the sender has time to construct the message, allowing them time to carefully consider what they wish to say. Secondly…there is less potential risk to the sender's self-esteem as a result of rejection…especially if the sender is geographically distant." Therefore, not only do you get to be in control of your conversation when you're flirting over text, but you also get to protect yourself from any potential heartbreak, making starting a romantic liaison with someone over text a far safer option to starting it in person.

Learn How to Flirt Over Text

No matter what technique you decide to use the next time you're feeling a little flirty, the most important thing to remember is to be yourself. If you feel like you're making responses for the type of person you think your crush wants you to be, then you're already setting yourself up for failure. It's okay to hit a few snags and misread a text or two, since part of the fun of flirting is not knowing what the other person is going to do or say next.

Comments
© 2006-2021 LoveToKnow, Corp., except where otherwise noted. All Rights Reserved.
How to Flirt Over Text: Cute & Clever Examples