"Will he ever propose" is a question that many women ask themselves at some point in a relationship. Not knowing if he wants to get married can impact your self-esteem, and may even be heartbreaking. Fortunately, there are some things you can do to help make it through this difficult time, and maybe even get him to propose in the process.

Will He Ever Propose?

Instead of wondering if he'll ever pop the question, take a look at the possible reasons why he hasn't got down on one knee yet. You may find that there is a good explanation.

It's expensive to get married, and it all starts with one of the biggest expenses of all -- the engagement ring. Your partner may be trying to save money so he can buy you the perfect diamond. If you suspect this is the reason he is waiting, you have a choice. You can patiently wait for that nice ring, or let him know that size doesn't matter and you'll gladly accept any ring he gives you.

Men usually like to feel secure in their career before proposing. He has a provider instinct, and that instinct tells him that he should only marry you once he can take care of you. Even if you make far more money than he does, the feeling may still be present within him.

He may love you with all of his heart and has no desire to be with another woman, but if he is very independent, the thought of settling down can be discouraging. Ease his concerns by telling him about the freedoms he will keep, and the new ones he will gain, once you are married.

It could be he hasn't proposed because he's afraid it will lead to the eventual destruction of your relationship. While you may need to help him overcome this fear before he will propose, at least it means he plans on taking his vows seriously.

He's Unsure About You

This is the one that causes you to lose sleep at night, but it needn't be an emotional rollercoaster. Realize that having been together long enough to even think about marriage is a good sign. It also means that he takes marriage seriously; as he contemplates whether you are someone he will devote himself to. Continue having fun together and pretty soon he'll decide that you really are the one for him.

If he has reasons - either real or imagined - to think that you may not be faithful to him now or in the future, he might have real reservations about popping the question. When a man asks a woman to marry him, he wants to be sure that she will be faithful to him. Any reservations to the contrary can certainly slow or halt any plans for a proposal.

A man who revels in his independence and enjoys living his life as he likes may have reservations about getting "tied down" by a marriage. If he wants nothing more than to do things you consider immature, he may fear you will nag him in marriage for spending the weekend playing video games or whatever his immature indulgence might be.

A man haunted by a past riddled with women not treating him well may have a conscious or unconscious fear of commitment because he doesn't want to allow another woman to hurt him again. Marriage brings with it a vulnerability, and if issues from the past prevent him from feeling comfortable and safe with you, he won't be ready to propose.

If you constantly pressure him about proposing, he may resist the notion to the point to where he doesn't propose simply on principle. He doesn't want to set a precedent where you "bully" him into doing things and he wants to make the decision on his own that the time is right for a proposal.

Signs You Should Leave Without a Proposal 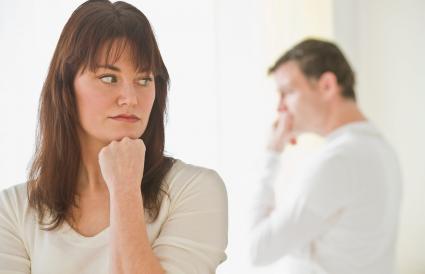 How long should you wait for a proposal? It truly depends on what life dictates for the two of you. According to researchers from Emory University, two years is the ideal time to wait until popping the question; this is based on a study that says couples who waited two years into the relationship to get engaged are less likely to split down the road than other couples. Of course, this doesn't mean that if the proposal doesn't come at the two-year mark, your relationship is doomed. There are, however, some signs that you should walk away from the relationship without the proposal.

The Relationship Is Toxic

A marriage proposal isn't a magic cure for an unhealthy relationship. People don't suddenly change for the better simply because they get married. If you're so focused on getting the proposal that you've swept all the other issues under the rug, it's time to face the issues and acknowledge that you may be better apart.

If he's always said that he never wants to get married and has never deviated from that principle, sticking around and hoping that he'll spontaneously change his mind will most likely not end well.

If he promises to propose only to postpone it numerous times, it may be a sign that he's never going to actually propose. This is especially true if you deliver an ultimatum that he disregards; don't say, "If you don't propose by December I'm leaving you!" and then stay despite your bold proclamation and his refusal.

If you spend too much time thinking about him and wondering will he ever propose, you may forget to take care of yourself. This is not good for your health and can even be bad for your relationship. Here are some tips to help maintain a healthy balance:

No man wants to be forced into proposing marriage. An engagement should be a mutual agreement between two people who love each other as opposed to a strained arrangement that one person felt forced into.

1
Comments
© 2006-2020 LoveToKnow, Corp., except where otherwise noted. All Rights Reserved.
Resources, Advice & Tips for Covid-19
Read More
How to Know if He Will Ever Propose