Men sometimes get a bad reputation in the dating world for being too laid back about relationships and feelings. This kind of attitude can make it seem like a guy is ignoring a girl even if he isn't. While avoiding a woman's messages and advances might seem like a jerk move, there are many reasons why he is ignoring a woman.

The Girl He Likes Is Taken

If a guy likes a girl, but she is already in a relationship with someone else, he may choose to stop interacting with her. While it might not seem like the nicest option, there are several reasons these men may be ignoring women:

While women think platonic relationships with men are plausible, Scientific American reports men have a more difficult time with this scenario. Once a guy has romantic feelings for a girl, he can't just turn those off because she's taken. Avoidance may be his only choice to save his feelings and ego from further damage.

His Feelings Are Not Reciprocated

There's almost nothing worse for a guy than to tell a woman he likes her when she doesn't feel the same way. This scenario can deflate his ego and cause him to lose a valuable friendship and potential relationship at the same time. Dating relationship advice columnist Jake, from Glamour magazine, suggests moving on from this situation requires several steps, which may be slightly different depending on the guy. The general process on how guys deal with rejection is:

If a guy racks up the courage to tell a girl he likes her, chances are he's perceived some signs of interest on her part. Otherwise, he might be too scared to share his feelings. Guys go into these types of conversations believing they have a good chance with the woman, so rejection can be quite a shock.

Because men are stereotypically expected to be initiators, it may seem like they have a bigger fear of rejection than women. Being turned down by a woman can cause a man to feel undesirable, unattractive, and as if his masculinity is in question. One way for men to avoid rejection is by avoiding any situation where it can happen.

This fear can hold a guy back from interacting with a woman until he sees clear and visible signs that she is interested. Responding to a woman's messages and advances are opportunities for him to see these signs, but he might also worry he's reading into feelings that aren't there. Ignoring the woman is the only way to ensure he doesn't misread signs or get rejected. The Good Men Project suggests there are three fears all men are driven by in relationships, and one of them is the fear of rejection.

His Life Is Seriously Busy

Between work, family, friends, hobbies and volunteer experiences life can get overwhelmingly busy for some people. If a man ignores a woman, it could be because his life is so crowded he can't make time to respond. An interview in The Atlantic in 2017 examined busyness of Americans and found people today seem busier than in the past. There are many reasons a guy's life is too busy:

The world is full of different kinds of people. There are some great guys out there and some downright jerks. A selfish guy who truly doesn't care about a woman's feelings will ignore her. Guys who are selfish, self-centered and overconfident are looking to meet their needs first, without any concern for the emotions of others. While a guy like this could just be an all-around bad person, he might also be putting himself and his needs above those of the women he's with. Either way, a guy who doesn't respect a woman may ignore her because he's so wrapped up in himself.

Some men ignore women because love is just too scary. Commitment and emotional vulnerability are staples of lasting relationships, but they can be terrifying for guys because they:

Different people have different reasons for their fear of love. While it may not seem like the best coping mechanism, avoiding love also helps a man avoid getting hurt. For many men, the joy is not worth the pain.

He Is Angry or Upset

Not only do men and women think differently, they also feel differently. Traditionally, men have been taught to suppress and hide emotions from others and even themselves. This is one reason why men sometimes retreat when they are angry or their feelings have been hurt. Anger is an emotion rooted in pain, and a man might not be prepared to show this pain to others because:

If he ignores you, it could be his way of dealing with a stressful moment in what he perceives as a constructive way. On the other hand, a guy with a mean streak might ignore a woman when he's angry as a way to hurt her back.

He Is Hiding Something 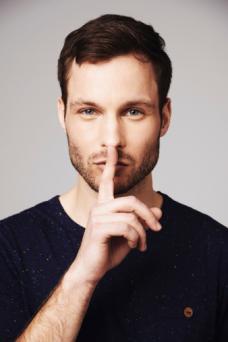 A guy who's holding secrets may ignore a woman as a means to avoid accidental slip-ups. If he's afraid he'll accidentally out himself, avoidance is a helpful tactic. He could be hiding something big, like he's married, or something small, like he finds your friends annoying. Women's Health shares eleven secrets men say they keep from their current love interest.

While it can be assumed most people have some secrets from close friends or family members, not everyone uses avoidance to keep those secrets. A guy who's lying or hiding something could be ignoring a woman because his secret is monopolizing his time.

He Is Playing Games

There is a lot of dating advice available from men and women with different views on the opposite sex. Sometimes this information is factual and helpful, but other times it is sheer opinion and can be hurtful. Experts at dating websites, like Match.com, suggest playing hard-to-get as a winning dating strategy for both men and women. The problem, they say, is when men and women disagree on exactly what this tactic looks like.

Some guys believe, based on experience and professional advice, women are more interested in long-term relationships with guys who aren't easy to grab onto. A man may ignore a woman as a means to get her attention and pique her interest. This kind of guy sees dating as a game of cat and mouse where he's got to lure you out, keep your attention, and surprise you with little chances to snatch him up.

There are many scenarios and specific situations where a man ignores, avoids or neglects a woman. Women can get to the bottom of a man's intentions by considering why they feel like his actions constitute ignoring, and what might trigger this behavior. When in doubt, be upfront and just ask him. There's always a chance the guy is not intentionally ignoring the woman or is just having trouble dealing with his emotions.