Do you know what teenage boys are thinking? For the girl wondering what is going on inside a teenage boy's mind the answer is far more complex than she might suspect.

What Teenage Boys Are Thinking

It's disingenuous to say boys only think about one thing: sex and that's it. It's a discredit to teenage boys and to society as a whole. Girls may rely on stereotypes and pop culture descriptions that show teenage boys as moonfaced with sex to the point that they have no interest in anything that isn't directly related to sex.

You might be happy to know that this misconception is just that, A study reported by the Journal of Adolescence actually disagreed with the stereotype. The study suggested that love, a desire for real relationships and strong friendships among their peers motivate teenage boys as much as or more than sex does.

The study sampled 105 teenage boys in New York. About 40 percent of the boys surveyed were sexually active and most had either dated or were in the process of dating. The boys were surveyed by psychologists and researchers about everything from why they asked a girl out to what their goals were with a physical relationship.

Thinking About That Girl

In the study, more than 80 percent of boys indicated that looks alone were not enough to ask someone out. Most indicated that they had to really like the person.

Pew Research suggests that all teens - not just boys - spend a good deal of time thinking about what's happening on social media with their friends. More specifically, they think about what they may be missing when not online. 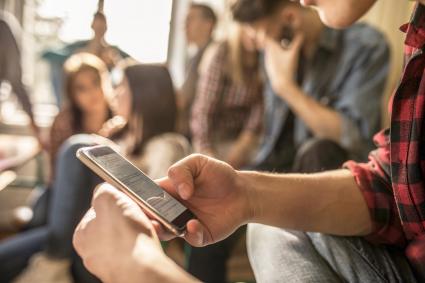 Whether it's a new movie release or an update on a video game, teenage boys greatly anticipate these events and often spend time thinking about what they will be like. Avid game players, for example, may mull over possible play scenarios to win or complete the game.

The Stress of Life

Just like everyone else, teen boys experience stress in daily life. School projects, working, or tension at home can consume a teen boy's thoughts throughout the day.

Getting to Know Teen Boys

The first step to getting to know what a teenage boy is thinking is to not assume it's about one thing and one thing only. You should realize that not everyone is receptive to a discussion about relationships, but that does not mean they aren't interested. It can be as uncomfortable for boys as it is for girls to discuss who he likes and why he likes her.

Many people assume that women are more comfortable with emotional discussions, thus teenage girls would be more receptive than teenage boys. This is a disservice to both genders. Getting to know each other is important to a boy and you should avoid assumptions. Take the time to get to know the guy you like because the best relationships often begin with friendship.

When it comes to teenage relationships, parents can be the best facilitators by helping their sons and daughters navigate the troubled waters of building, maintaining and even repairing relationships. Adolescence is a muddled time of hormones, changes, demands, and pressures. Moms and dads can both act as sounding boards, particularly when you need advice about dating and relationships. If you are comfortable talking to your dad, you might ask him what he liked about girls when he was your age and what he liked to talk about.

Never assume a teenage boy is just one thing or thinking about only one thing. Teenagers are very complex and deserve to be respected for their layers. While adults may view your romantic and platonic entanglements as being relatively innocent or superficial, it's important to recognize that the relationships you form now will help you develop relationships in the future.

Get to Know Them

For teenage girls trying to understand the boys they like, it is a good time to get to know them. Don't assume that all boys fit into a stereotypical mold that high school casts students in from the jocks to the nerds to the geeks to the cool kids to the misfits. Taking the time to get to know someone as a person and not as a "type" (i.e. teenage boy) can mean the difference between a real friendship, relationship and a superficial one.

You might have a few ideas of what teen boys are thinking, but if you can't answer without falling back on the stereotypes, it's time to get to know the boy as a person and not a category. It's far easier to know what a person is thinking when you know that person well.

10
Comments
© 2006-2021 LoveToKnow, Corp., except where otherwise noted. All Rights Reserved.
What Teenage Boys Are Really Thinking