Ever wonder, 'Does he think about me as much as I think about him?' Men and women think differently, and while one method isn't better than the other, the differences in thinking can be frustrating to women who want to understand how men think. Author and workshop leader Alison Armstrong provides expert advice to help women better understand how men think - and the secret to making relationships better as a result.

The Difference Between Men and Women

Armstrong says very few women actually realize how different thinking is between men and women, yet desires remain the same. "We are more different than we can imagine! The only way that I have discovered that men and women are alike is in our core desire. A desire to be loved, a desire to be accepted exactly the way that we are. And a desire to love, to love fully and to have one's love fully received and cherished."

Men aren't as cut off from their feelings as many women might think, says Armstrong. "A common problem is that women think men are cut off from their feelings. Actually, men's feelings are literally in a different place in their bodies. Women feel happy right in the middle of their chest, like a vibration of happiness. A man, when he feels happy, it's his upper chest and shoulders and neck that fill with energy. If you're watching him, he will literally puff up. He'll look bigger. If he has a moment of ecstasy and is really happy, it flows out through the chest and into his arms and hands, and that's where you get high-fives or jumping up to hit a cross-beam. But when I ask men 'Where do you feel happiness?' they look bewildered. They actually pay more attention to women being happy than to themselves being happy!"

"One major difference is that women base more decisions on love," says Armstrong. "As a woman, if I love you and you love me, we should get married. It's that simple. For a man, that he loves a woman is just one of many factors. One big thing he's going to consider is if she fits with the life that he envisions for himself, his goals. Since he doesn't expect her to give up her life to blend into his, this can be very important. Men listen very carefully to women express themselves about what their dreams are and what they want, and they think, 'Could I give that to her? Do I want to give that to her?' It's possible for men to want us to fulfill our dreams, but not want to be the person to be there when we do it."

It's no mystery that women are generally more capable of multi-tasking than men. "Women pay attention to a lot of things at the same time. We almost never give anything our undivided attention," explains Armstrong. "That's natural for a woman. But men don't tend to be good multi-taskers. They pay attention to one result at a time. They commit themselves to that one result and they're entirely focused on it, and they get very frustrated when they don't have what they need to do it. That can be hard for a woman to understand."

"Men look for different things in a romantic relationship than in their other relationships," says Armstrong. "They are looking for what they are not, and the word for that is femininity. It's the qualities they don't find in themselves or their friends. They're very much looking for nurturing, someone who cares for them and cares about them and pays attention in a way that women are uniquely made to pay attention. Men derive an enormous amount of comfort from a woman's believing in them. If she thinks he can do it, he must be able to do it. It makes them braver. A man is also looking for a woman who will respond to his playfulness. Women tend to be much more serious. He's looking for her to be delighted. To be tickled. To let him make her laugh." 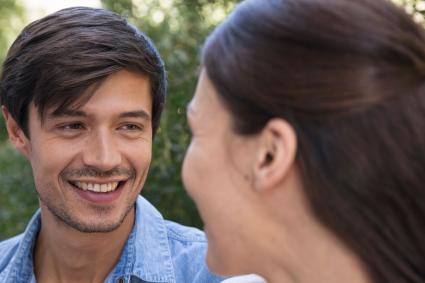 Armstrong says men want a woman who will be behind him in good times and bad times. "One of the terms they use a lot is, 'I'm looking for a woman who will have my back.' When I say that to women, they're like, 'What does that mean?' It's a kind of loyalty that men provide each other in their friendships. When a man commits to a person, he buys the whole package. If someone criticizes his friend, he says 'That's just the way he is.' He accepts that friendship or business partner or wife or girlfriend all the ways that she is, or all the ways that she isn't.

Women don't generally have the same tendency to accept people for who they are, says Armstrong. "It's not something women usually do naturally," she says. "Women commit one small acceptance at a time. We don't just say, 'That's the way he is.' We say, 'This is the way he is, and I like these parts, and those parts I'm going to change.'"

"Criticism ends more relationships than anything I can think of," says Armstrong. "Criticism does not cause a man to change. Because women tend to respond to criticism, we think criticizing a man will change him. But it just makes a man feel not accepted like he should keep his distance. It makes him feel he should be less giving and less involved."

The Importance of Praise

Armstrong stresses the importance of praising men when things are done right. "Offer them loads of appreciation when they do things right! And do it in a way that he'll respond to. Men like to hear appreciation, but they're much more responsive to seeing it. In fact, things that have gone out of fashion, that feminism has put out of fashion, are really appreciated by men. If we're married and living together, anything that supports him in being a provider is going to make him feel appreciated. So if I make him lunch to take to work with him, that's appreciation. It's such a small thing for me, but it makes him feel great."

Armstrong doesn't suggest acting weak in order to attract men. "No, not at all," she says. "A woman needs to shift her relationships with men at the core. The more we understand that men are distinct, the easier it is to admire them. There are ways that men think, ways that they approach things that women often don't have. It's ok to need men. There's no dishonor in that. We were made to be partners."

Of course, while it's true that men and women generally think differently, it's important to not lump all men into one characterization. Every man is different, with different thoughts and feelings. If you're wondering what your male friend or partner is thinking - ask him!

6
Comments
© 2006-2020 LoveToKnow, Corp., except where otherwise noted. All Rights Reserved.
The Secret to Understanding How Men Think