As much as women are supposed to be hard for guys to understand, it is also hard as a woman to see the signs a shy guy likes you. However, the signs a shy man is attracted to you are usually there - if you know what to look for.

Signs a Shy Guy Likes You

While the following signs a shy guy likes you are all accurate in some circumstances, they are also generalities - don't assume that if you don't see them the guy doesn't like you. In addition, they aren't necessarily unique to men - women do many of these things as well.

A shy guy isn't going to come right out and let you know that he likes you - that kind of fails by definition. But if, when you are around, he suddenly seems to have trouble speaking, whether to you or someone else, it could be a sign that your presence causes him stress.

Aside from a stammer, there are other more directly physical signs that a guy likes you. Does his face get red? Does he get goose pimples? Does he suddenly get thirsty? Any of these could be an indication of an increased heart rate or sexual attraction. 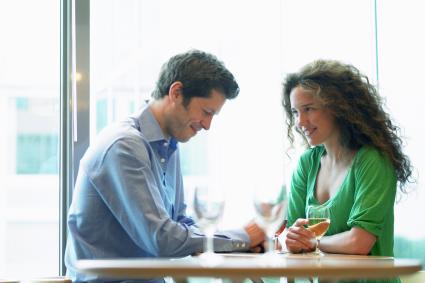 One of the less attractive signs is if the shy guy suddenly goes through a personality change when he's around you. He may become more belligerent, or seem to be showing off whether with extravagant gestures ("Buy the bar a round!") or other "macho" methods. This kind of mating instinct is the same thing that makes peacocks spread their feathers and should be considered as a possible sign that the guy is too shy to let you know he likes you by more direct means.

If you see a guy who seems to be fine talking to many other women, especially if those women are very similar to you, but he doesn't seem willing to show you the same attention - well, it might be that he doesn't like you. But it's also possible that he is doing it because he does like you, and he's only able to talk to the others because he doesn't really fear their reaction.

A shy guy may show that he likes you through indirect methods such as sending you notes, flowers, sweets, or other forms of appreciation. The best kind of indirect sign, though, is when you suddenly find something that you want - tickets to a concert you mentioned in passing, or a scarf you saw in a window and only lingered on a moment - given to you. That shows that not only does he like you, he is also paying attention to what you like.

Do you notice that the shy guy who won't talk to you directly seems to be around a lot, in social situations and other places? The cute side of this is that he simply is trying to be near you while still being unsure of how to show how he likes you. Of course, the other side of this is stalking, and that may be something to address.

Although nervous to tell you how he feels, a shy guy will go above and beyond to let you know how much he cares about you. He may run errands with you, bring you soup when you feel sick, and offer to pick you up from the airport. Look for sweet behavioral signs to see if he might be into you.

When you are in sync with someone, you will automatically mirror their body language. This includes leaning towards them, pointing your feet and torso in their direction, and mirroring their body posture and hand gestures. Next time you chat with him check out his body posture and note if he has positioned himself towards you and if he is holding his body in a similar way.

Without saying anything, those that like you will hold eye contact a bit longer than say a friend would. This extra moment can signal that they are interested in you as more than just a buddy. Holding eye contact is a safe way for a shy guy to test out an intimate action without it being too risky.

Sensitive to Your Love Interests

A shy guy may like you enough to listen to you talk about other guys you're interested in. He may, however, throw in a few digs to make these other guys seem a bit less desirable.

Although he might feel nervous to tell you how he feels directly, a shy guy may come up with a sweet nickname just for you and call you by it affectionately. This is his way of connecting with you on a more intimate level to see how you react.

Pay attention to how often he touches you when you're with him. A shy guy may playfully touch you as a way to flirt subtly with you. He may linger when he gives you a hug or brush up against your arm when you're chatting with him.

What Do You Do With a Shy Guy?

Whatever the signs, you may be tempted to take the direct approach and simply confront the guy with the question: "Do you like me?" While this may work, it can also be cruel. A better way to find out is to express your own like for him (if it exists). Go out of your way to be with him, or even ask him out on a date.

If, however, the shy guy's attentions are unwelcome, you would be doing the both of you a kindness to ignore him completely. Any contact at all with a crushing guy will encourage him - it is better to let his crush play out, and he'll eventually move on to more receptive people.