Kissing games are a fun way to practice kissing. They also give you the opportunity to kiss someone that you have a crush on. Don't take the game too seriously, however. The games are supposed to be fun, and no player has an obligation to date players he or she kisses.

Consenting adults looking for fun ways to kiss can try out these no-pressure kissing games with a boyfriend or girlfriend or a group. While the games are meant to be light and fun, be respectful if anyone changes their mind about playing. There are many kissing games but two are the most well known.

The rules of spin the bottle are simple. You need a minimum of four players. The game is better with large groups of eight or more. An empty two-liter bottle makes a good bottle, but it's more satisfying to spin a bottle that has more weight to it, such as a glass bottle. If you prefer to have your destiny determined by another person, you can play a variant of spin the bottle. In the variant, each person takes a turn spinning the bottle twice. The two people selected by the spins must then kiss.

After Spin the Bottle, the next most famous kissing game is Seven Minutes in Heaven. There are almost no rules for this game.

The main variations of this game are how the players are selected. Sometimes the host will select two people, and other times it is a chance encounter like in Spin the Bottle. This game is great for setting up two people of different social status. It is also fun to set up two people whom you think already have a crush on each other.

Other variations to the game involve the choice of room, props, and rules. You can blindfold the players so they don't know whom they are kissing, for example. You can also forbid talking in the room as well. Just make sure you the room is dark enough so the players will have more courage to kiss instead of just staring at the walls for seven minutes.

There are more kissing games than just Spin the Bottle and Seven Minutes in Heaven. Kissing games for couples or groups of couples can be simple and demure or more complex.

Truth or dare is more than just a kissing game, but often a kiss is used as a dare.

You don't have to be lucky or popular to get a kiss in this game. In Post Office, everyone gets a kiss.

If you want a unique, romantic game that involves kissing you can print out the free Love Dominoes game. While the whole game isn't just about kissing, if you play your dominos with the lips on them you get to kiss the other player. 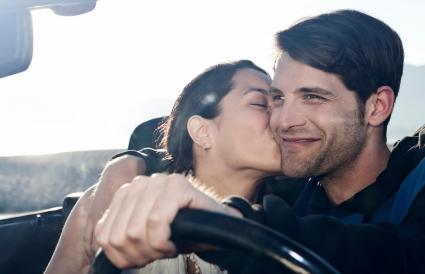 Games that are free and don't require any materials are easy to play at home or on the go. Try The Kissing Game in the car with your boyfriend or girlfriend to make it a more enjoyable bonding experience.

Played like a game of cooperative tag, this fun game gets everyone moving. You'll need at least six people to play, preferably an even split of guys and ladies.

Get Your Kissing Game On

You can modify many other games to include a kissing component. For example, in Monopoly, instead of paying money when you land on someone's hotel, ask the owner if he or she will accept a kiss instead. A little creativity will lead to lots of fun and plenty of kisses.