What does it mean when you catch a guy staring at you? Maybe you've notice your guy friend paying more attention to you. Figuring out if he is into you is more than just noticing if he's looking at you. Of course asking will get you an answer, but there are ways to tell without being so bold, like where his eyes look, does he touch you more or, even, him noticing little changes in your appearance.

He's Staring at You

Have you noticed he has been looking at you a lot more often these days? If you notice he is making more eye contact with you or you catch a guy staring at you, he is probably attracted to you. He may be enthralled by your good looks and may be fantasizing about kissing you. Perhaps he stares at you and smiles; that could mean he likes you, too. Cosmopolitan's list of body language to watch for says he may not leave it to intense eye contact to communicate his feelings to you. Instead, he may spend some time looking at your mouth and nose while you chat. Pay attention to how focused he is on your face versus looking over your shoulder or around the room. He may be staring, but not talk to you if he's nervous.

Besides looking at you, is he touching you much more than he has in the past? He may touch your shoulder, arm or hand as you talk. This is because touching you allows him to connect with you in some way, no matter how small. Even in this fleeting moment, he can be close to you. 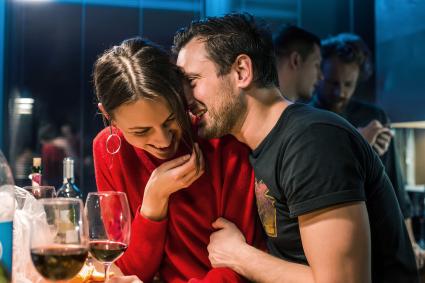 He Takes up More Space

Today.com says when a guy is interested, he'll stand with his hands on his hips, elbows out, fingers pointing down. He's playing up his physical size and trying to appear confident with this stance. Taking up more space can play up his size, especially if there are other guys around vying for your attention. Think Animal Planet mating season, but with people.

He Gives You Extra Attention

Several guys may check you out over the course of the day, but is there more to it? Was he just admiring you for a second, or could there be a strong enough attraction to pursue something further with him? An attracted man will do what he can to keep the conversation going and will gravitate in your direction, according to professional dating coach Mike Goldstein. He'll keep providing new information meant to make you feel safe or view him in a positive light, all while inching closer to you. If possible, he'll attempt to reignite dwindling conversations before he gives up and walks away.

He Tugs on His Socks

Relationship expert Tracey Cox says a guy who pulls his socks up while he's talking to someone he is interested in. This habit is rooted in a point in history when men would wear their nice suits for special occasions. They wouldn't get new socks for the occasion and would just wear their old, loose fitting ones, then spend the evening tugging them back up to make sure they looked as put together as possible. So, if he's primping and fixing his outer appearance a fair amount in your presence, chances are he's into you.

He may notice little things and say so out loud. He may even compliment you. This is one that a guy may or may not feel comfortable doing if he's attracted to you. Giving compliments to someone you like can be intimidating and leave him feeling too vulnerable, so not all guys who are attracted to you will do it. However, if a guy does go out of his way to tell you that you look nice, mentions your hair is different, or says he likes your outfit, there's a good chance he's attracted to you.

Glamour says a guy who's attracted will compliment you or notice something different, something minor, and comment on it. A guy who isn't attracted to you wouldn't notice a small change. He'd have to be paying special attention to you to catch it.

Pupils dilate for several reasons, one being attraction. Larger pupils can unconsciously signal a partner that you are receptive to them. If you notice his pupils look slightly more dilated than usual, he may be into you.

His Stumbles Over His Words

Guys on the shy side may have to build up the confidence to speak with you. If they do, they may stumble over their words and mispronounce phrases. These signs of nervousness could indicate that he is interested in you and feels extra pressure to make a good first impression or just generally impress you. He cares about what you think and wants you to like him back.

He Works Up a Sweat

Ever get sweaty palms before a job interview, or before giving a presentation? Sweating can be a sign of nervousness or anxiousness. Because he cares about what you think of him, he may get a little sweaty when he interacts with you. Sweating also releases pheromones which can lead to you unconsciously feeling drawn to certain people. This is why many individuals feel attraction super quickly. 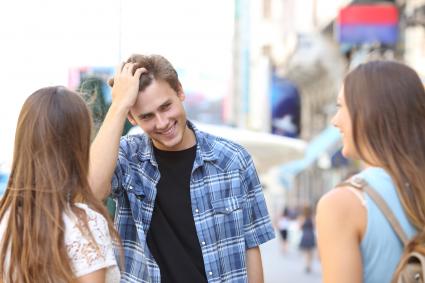 He Offers to Help You Out

A guy that offers to help you out in any way or goes out of his way to lend a hand most likely is drawn to you in some way. If you aren't close friends with him and he is continuously offering to be there for you, chances are he is attracted to you and wants to show you some of his positive attributes.

He Shows Interest in Your Hobbies

We are naturally drawn to similar others so he may show an interest in your hobbies as a way to connect with you and show you that he is likeable. Liking similar activities is a sign of compatibility, so he may be trying to show you just how good you two would be together as a couple. Showing an interest in your hobbies is also a good way to begin to build a genuine connection, so notice if he actually seems into the same hobbies, or if he's just grasping for any type of connection. 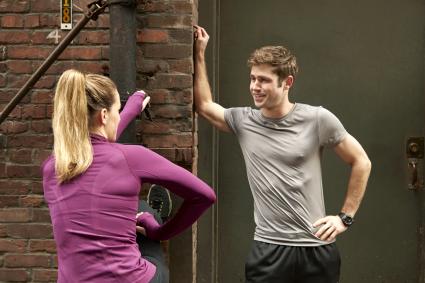 He Shows Up More Often

He Wants to Meet Your Friends

Guys who are interested in you know how important the approval of your friends can be. He may befriend some of your friends, or ask to hang out all together. He may ask your friends if they think you're into him too. He will probably go out of his way to connect with your friends so if he asks you out, you know your friend group already likes him too.

Guys that are into you will not only listen to you, but validate your feelings. He truly cares about what you have to say and wants to be there for you when you are feeling down. Showing signs of compassion and empathy are great ways to see if he's interested in being more than friends as these are key components in healthy romantic relationships.

Ever watch a show that truly interests you? You've probably leaned in during the really exciting moments. That's because we move closer to people or things we like. If you notice him leaning in towards you while you speak, he most likely is interested in you romantically. Pay attention to how often he leans into you. If it's almost always, it's a good sign of him liking you. 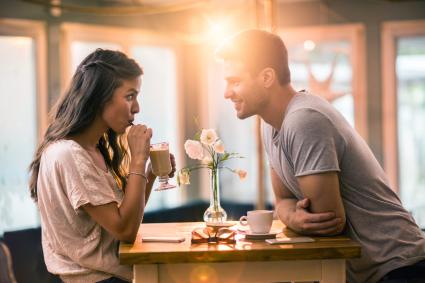 He Shows Physical Signs of Openness

Unconsciously, when there's a physical attraction between people, your bodies with show signs of openness to convey a level of trust between both individuals. If he likes you, his body language will be relaxed, arms will not be crossed, his feet will point towards you, and his breathing will be regular. Notice your body language too. Do you feel relaxed around this person, or do you tend to close off and feel uncomfortable?

He Listens to You

If he's into you, he'll actually listen to what you have to say and try to engage in meaningful conversations with you. This means he won't bulldoze you as you speak, he'll ask lots of questions, and he'll demonstrate with active listening that he gets you.

When you feel connected and in tune with someone, you will unconsciously mirror their facial and body language. If he stands similarly to you, begins speaking more like you, gestures similarly, or makes similar facial expressions then he probably likes you.

If he likes you, being around you will make him happy. This means you'll notice him smiling and laughing more when he's with you. He may even have a hard time not smiling because he's excited to be spending time with you.

He Tries to Be Close

Guys that are into you will try to get as close to you as they possibly can without breaking any social contracts or norms. This means they may flirt, linger a little longer when they hug you, and give any excuse to touch you, even if it's just for a brief moment. These tiny moments of connection contain a lot of information when it comes to attraction.

If He Is Attracted to You