Are you looking for tips on how to romance a man? Tina B. Tessina, Ph.D., a licensed psychotherapist and author of The Unofficial Guide to Dating Again, offers some great advice on how men want to be romanced.

Romancing a Man: What Women Need to Know

Tessina says men and women have different ideas of what is romantic. "Most men like to be in charge," says Tessina. "All of them like to know women are interested, but then they want to set the pace of the relationship."

"All men are different," says Tessina. "You have to figure out what gets his attention, and what turns him on." Tessina suggests certain cues that let him know you are interested and will get his attention:

The Importance of Romancing a Man

"The importance of romancing a man depends on who he is to you," says Tessina. "If he's your husband, it's very important to romance him from time to time, to keep the passion alive in a long-term relationship. "If he's some guy at the office that you have your eye on, you need a way to let him know that you want more than a business relationship. If he's a long-time friend, or ex of your friend, romancing him will let him know you're not just a pal."

It's often the case that a woman has differing opinions from her man as to what qualifies as romantic. "You have to find a common ground that works with each other," says Tessina. "Being invited to a chick flick, or going shopping for clothes are things he'll be willing to do with you after he is committed because he loves you. You need to figure out where you two can agree on liking something. If you do something with him that you absolutely hate, you won't be any fun, and you'll turn him off. If you invite him to something he hates, he may not go in the first place, and if he does, and is bored, that's a turnoff. If there's no common ground, there is probably no real relationship possibility."

Tips on How to Romance a Man

Showing interest and making an effort can start the process of romancing a man while also testing the waters to see if he's interested. Pay close attention to what seems to grab his interest.

"Be fun to be with and tease him a little," says Tessina. "However, don't hang all over him, don't act like an overeager puppy. He wants to know he won't be rejected, but he also wants to work a bit to achieve his goal."

"If you really want to have a relationship with this man, show interest, then hold back a little. He's easier to catch if he's not wary of you," advises Tessina. "You can invite him to do something - men like to be useful, so it's good to ask him to help you solve a computer problem, advise you on investments (you don't have to take the advice) or help you pick out a new tech gadget. If he does help, you can offer to take him to lunch or cook him dinner (if you cook) to thank him. However, it's important to know that once you've made that connection, you have to back off. He needs to make the next move. Backing off and playing the waiting game is the hardest part, but if you don't do it, he won't know he wants to be with you."

"Invite him over to watch sports, election returns, a movie, or a space launch on your flat screen TV, with some other friends," suggests Tessina. "His guard will be down and seeing you having a good time with your friends will be very attractive. Flirting is the art of letting him know you're interested in him in subtle ways, but not being too obvious."

"Invite him to test drive your new car, or help you download tunes on your iPod," said Tessina. "Gadgets fascinate most men, and it's a good opportunity to get to know each other. If he likes guns, ask him to teach you to shoot, or do target practice. Ask him to teach you chess or an online video game."

"If you see him reading a book, magazine, online news source or newspaper, read it yourself, and then discuss it with him. If he's political, get informed about whatever interests him," says Tessina. "Find a venue where he's comfortable and happy and ask him to show you something about that pursuit."

"While you're together, keep the conversation light," says Tessina. "Find out as much as you can about what he likes without interrogating him. If he mentions doing something or going somewhere interesting, say 'Oh, I've always wanted to do that.' It's non-committal, doesn't beg for an invitation but plants the idea in his mind that it might be fun to go with you." 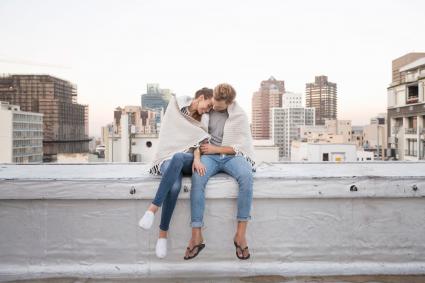 "Touch him if you get a chance," says Tessina. "For example, if you ask him to teach you golf or tennis, ask him to show you how to hold the club or the racket, and linger in the touching position. Smell good, but don't overdo the perfume. Your clean body scent will turn him on if he gets close enough to smell it. Listen carefully to what he says, and feed it back to him: 'OK, you said to hold it like this, and follow through on the swing. Like this?' Ask interested questions 'What will happen if I do it this way?' 'Can I use it like this?'"

Don't Be a Drag

"If you go camping, climbing, fishing, hunting etc. with your guy, don't be too timid about it. If you're a drag, that's all he'll remember. Don't put yourself in danger, ask for his help, but don't whine," says Tessina.

"If you're in a relationship, but want to turn up the heat a little, try learning something together," says Tessina. "Working together compatibly to accomplish something is very endearing."

"If you've made him dinner, or after the game on TV is over and your friends have gone home; ask him to help clean up and put on some slow dance music while you're doing it," says Tessina. "Dance around him a bit while you're walking back and forth tidying up. Most men will respond, and if you wind up slow dancing in the kitchen, that's very sexy and romantic for him, too. If you can then say 'good night' without having sex, he'll be really intrigued, and looking for a way to come over again."

The End Game of Romance

"If he likes it, he'll be back for more," says Tessina. "If you have tempted him and teased him a little, and he resonates to your energy and presence, he'll be all over it. He'll be offering to help you with other things, go on another outing, get together again. Just keep the tease going, hold back a little, because if you become too easy to be around, you'll lose value in his eyes. In 27 years of a great marriage, I've found it's very helpful to be just a little hard to get from time to time. It keeps the relationship exciting and fun."

Comments
© 2006-2021 LoveToKnow, Corp., except where otherwise noted. All Rights Reserved.
Awesome Expert Tips on How to Romance a Man